ATLANTA, GA. — MAY 28, 2019 — Goodr, a real-time food rescue app built on blockchain, today announced its express delivery partnership with Roadie, the on-the-way delivery service with the nation’s largest local same-day delivery footprint. Through the partnership, Goodr can now rapidly deploy and expand its food management program to any market in the country, allowing businesses and restaurants to conveniently donate surplus food deliveries to people and local charities in need.

“We believe that hunger isn’t a scarcity issue, but a logistics issue,” said Jasmine Crowe, Founder & CEO of Goodr. “Americans waste over 133 billion pounds of perfectly edible food each year, much of that coming from restaurants and grocery stores. Working with Roadie allows us to quickly expand to new markets and new organizations in need at a much faster rate than if we were to build our own fleet.”

The first of its kind to utilize blockchain for social good, Goodr’s food waste management platform provides a secure ledger to track an organization’s surplus food waste from pickup to donation, unlocking significant tax deductions and helping predict where organizations order too much food.

The model also reduces an organization’s greenhouse emissions from landfills, decreases its waste bill, and gets edible surplus food to local communities in need. Since its launch, companies using Goodr have donated nearly 2 million pounds of food and have saved nearly $8 million in tax benefits.

The partnership marks the first time Goodr has outsourced its logistics platform to deliver unused food at scale. The company will utilize Roadie’s crowdsourced model, which taps into unused capacity in passenger vehicles already on the road, to get surplus food delivered same-day to food donation centers like churches or shelters.

“People helping people has been at the core of Roadie since day one, and partnering with Goodr to rescue and redistribute food exemplifies the very best of our community,” said Marc Gorlin, Founder & CEO of Roadie. “Because we’re tapping into latent capacity already on the road, our model makes it easy and convenient to rapidly donate meals at scale to people in need, at any time, anywhere.”


The partnership has launched in six major U.S. markets, including Atlanta, Raleigh, Washington D.C., Chicago, Philadelphia and Los Angeles, with more to come later this year.

“We have been able to accelerate our food rescue programs to service communities in multiple cities thanks to Roadie’s ability to scale delivery to the demand of any market,” added Jasmine Crowe. “This partnership offers Goodr a faster, easier way to bring its programs to any city nationwide.”

Since its 2015 launch, Roadie has grown to over 120,000 verified drivers nationwide and now covers 89 percent of U.S. households — the largest same-day delivery footprint in the nation. 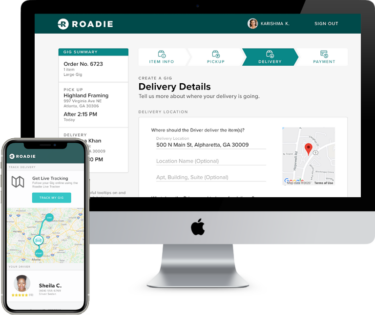